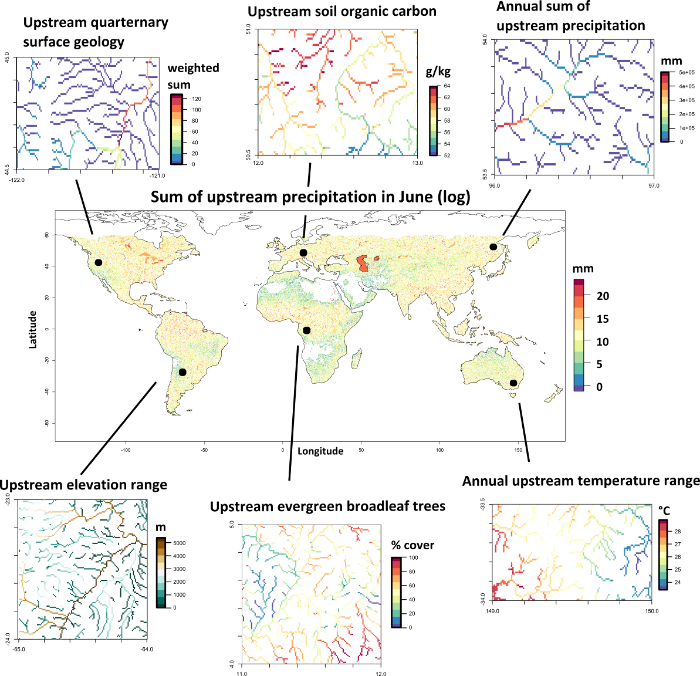 The dataset consists of near-global, spatially continuous, and freshwater-specific environmental variables in a standardized 1km grid. We delineated the sub-catchment for each grid cell along the HydroSHEDS river network and summarized the upstream environment (climate, topography, land cover, surface geology and soil) to each grid cell using various metrics (average, minimum, maximum, range, sum, inverse distance-weighted average and sum). All variables were subsequently averaged across single lakes and reservoirs of the Global lakes and Wetlands Database that are connected to the river network. Monthly climate variables were summarized into 19 long-term climatic variables following the “bioclim” framework. To facilitate the generation of freshwater variables for custom study areas and spatial grains, we provide the “r.stream.watersheds” and “r.stream.variables” add-ons for the GRASS GIS software.

We provide a variety of different metrics of the upstream environment along the stream network, resulting in a total of 324 layers. Each variable comes in the netCDF-4 format (network Common Data Form version 4) in a cell size of 30 arc-seconds (~1km at the Equator) in the WGS84 coordinate system with an extent of 60°N to 5°S latitude and 145°W to 180°E longitude. All variables consists of 39000 columns and 13920 rows. Each netCDF file contains one variable (e.g. upstream average land cover) where the single layers are stacked as single bands (e.g. 12 landcover classes). The pixel type of the layers ranges from Byte (upstream land cover) to Float64 (upstream precipitation).

The variables can be downloaded in the netCDF-4 format. See the ReadMe for an overview of the variables and the band number, as well as Table 2 of the associated publication for additional information.

We recommend to use the software R to load and process the variables. We provide example code that shows how to load, crop, extract and export the variables in the netCDF format in R, how to snap points to the gridded variables and extract the variables for each point, and how and to use the GRASS GIS add-ons “r.stream.watersheds” and “r.stream.variables” to calculate similar variables for custom study areas and different spatial grains (see the tutorial on spatial-ecology.net).

EarthEnv Near-global environmental information for freshwater ecosystems in 1km resolution Version 1 by Domisch et al. is licensed under a “Creative Commons Attribution-NonCommercial-ShareAlike 4.0 International License”. Permissions beyond the scope of this license may be available at http://www.earthenv.org/.